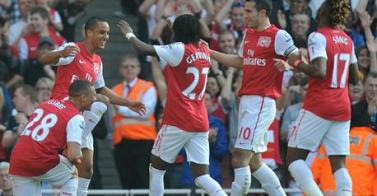 Finally! Finally! Arsenal did it! Okay, deep breath everyone, it’s not like they won a trophy, (something that seems to have eluded the team in like, what? SEVEN YEARS!!!), but I’m happy for these guys men! They kept on giving it all they had. Personally, I thought Arsenal was going to be relegated this season, no playing!I mean, at some point, they were sitting at 14th on the league table? Really? It seemed as impossible and unbelievable as a house with 36 inch rims…
Today, their game with Aston Villa was one in which Arsenal’s attacking prowess showed. The team’s fitness level seemed perfect. Their mental mastery of the game was without question OR, maybe their defensive line was not hard pressed, maybe today was just a very good day. Mikel Arterta, Theo Walcott and Kierran Gibbs all strutted their stuff today and Aston Villa had no reply.
Hopefully, the Gunners would be able to keep this consistency, as it beats my imagination why they lack consistency in their winnings. Any Arsenal fan can remember the glory days of the 49 game unbeaten run we had when we had the honour of having the ‘French Connection’, I don’t need to go into that now, you can read that from my last write up. *Sigh*
Experience!Experience!Experience! I shout and scream and yell this again and again, Wengy, Wenger, Arsene, Arseny lovely!(Men! I’m using whatever pet name I can find in my ‘Arsenal’ to soften the man up to reason, bear with me), please, buy back Henry, if for anything, for the morale boost, he trained with us, though he did not score much but the team kind of came alive, not necessarily in their winnings, but, in the belief they had in themselves. Henry is on fire now for New York Red Bulls; and Viera and Fabregas yes, yes, I know, let’s not be reminded of the one’s that got away.
Although I called for his head many times at the beginning of the season (football is an emotional game so, DO NOT look at me funny or make me feel guilty), he indeed has done a great job, only as I repeat, listen to people like me, people who have loved the club from the beginning while I was a cherub in heaven, before I was born. Listen to the voice of reason a.k.a mine, and well, other Arsenal fans.
I have said times without number and I fulfil these dreams over my laptop playing Football Manager, CUT DOWN YOUR SQUAD!!! The guy doesn’t listen, didn’t listen until, well now. Due to the £20,000,000 wage increase the club saw last year, it has decided to trim its squad (I’m rolling my eyes at this BECAUSE, this was what I have been singing into Arsene’s ear for the past two years), the list apparently includes the likes of Manuel Almunia, Marouane Chamakh, Sebastien Squillaci, Andrei Arshavin, Carlos Vela, Denilson, Nicklas Bendtner and Chu Young Park. I wonder why Diaby is not on that list and Carlos Vela out of it. Carlos does pretty well for his country and I think if he is given the same chance as Oxlade has been given, he’d improve or, has he been given that already? I cannot remember, he just isn’t getting enough playing time. He should go on loan to a second division where he can get enough playing time and improve his mental strength .
Anyway, Wenger can breathe easy now, three points ahead of Tottenham and the season almost over; what more could a manager who was almost hanged at the start of the season ask for? Oh yes! He could ask for one more thing, having me as his consultant/personal assistant on transfer market dealings. *wink*