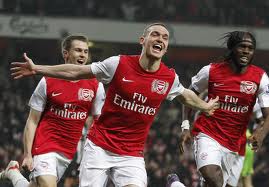 Hopefully, Arsenal’s match this weekend will see them book an automatic slot in the Champion’s League. We would have done a lot better though if Arsene had listened to me and hired me as a Transfer Market consultant at the Emirates; comon! I’m not that expensive! I mean, all my predictions and promptings (while watching the matches with my mates, oh well! you would think that with all this talk of predictions and promptings I would be a board member by now -rolling my eyes.) have made absolute financial and tactical sense.

For instance, when Thierry Henry was let loose by Barcelona, I personally told Arsene (in my sleep) to pick up this guy for cheap, but no! he picks up M.Chamakh instead. When Viera was on the fringes at Inter, I was like, dude, open yer’ eyes!!! But again, no! And Viera goes on to score over 11 goals for Manchester City. Ever since Gilberto and Viera left the DMF (Defensive Mid – Field), well, you know… no offence Song but having those guys around would have made you extra world class.
As Gunners prepare for their match, lets hope they’ll have consistency and composure in front of goal. And hire me next season.

Monsieur Spruce. Chancellor of the Order of the Canon. Promoter Of All Things Dapper.
Website: https://misterspruce.co.uk/
Posts created: 1159
Previous article An In-depth Review of The English Premier League Teams for 2011/2012
Next article What Kind of Fashion Blog Fits Your Reading Style?